skip to main | skip to sidebar

I learned yesterday that Rarer and More Wonderful has been nominated for the NCIBA book award in the poetry category. I am terribly pleased that my book is being considered for the same award whose finalists and award winners include Willis Barnstone, Robert Haas, Ben Lerner, and Joanne Kyger. Deep breath, and wow!
Posted by Trevor at 3:41 PM 36 comments:

Reading in Denver, CO this Saturday!


Bhanu Kapil is a French cat, on the verge of becoming a real dog. A new U.S. citizen, she is looking forward to writing an American book, an American poem. It's as if all the writing before this doesn't count. And, it doesn't. Written in passage, or years after arrival, it doesn't matter unless you stay. A literature of stay. She is the author of The Vertical Interrogation of Strangers (Kelsey Street Press, 2001), Incubation: a space for monsters (Leon Works, 2006), and Humanimal, a project for future children (forthcoming from Kelsey Street Press).

Bin Ramke’s ninth book Tendril was recently published by Omnidawn. Some the origami swans he’d made at our pervious house readings can be found on a ledge in our kitchen.

Danielle Pafunda is the author of My Zorba and Pretty Young Thing. She’s recently moved to Wyoming. Her poems have been chosen three times for Best American Poetry (2004, 2006, and 2007). Other poems and reviews have appeared in such publications as American Letters & Commentary, Conjunctions, the Georgia Review, and TriQuarterly. She is coeditor of the online journal La Petite Zine.

Trevor Calvert is a poet living in Oakland, California where he is finishing his Masters of Library and Information Science. His first book, Rarer and More Wonderful (Scrambler Books, 2008) was published in May. His poems have appeared in in*tense, syllogism, 580 Split, BlazeVox, and the anthologies Involuntary Vision and Bay Poetics. This is his first time visiting Colorado. We have it from a reliable source that he is some kind of ninja, but uses his skills only for good.

Barbara Barg, grew up in a small town in Eastern Arkansas and moved to New York City after college where she became a several-times-recognized-in-a-coffee-shop poet/musician on the downtown poetry/music scene. Currently, she's a singer/songwriter/drummer with the Denver band Coyote Poets of the Universe. She also conducts a sensory/creativity/focus/energy/joy enhancing workshop: Voluntary Evolution (www.voluntaryevolution.com). She is the author of The Origin of The Species from Semiotext(e).
Posted by Trevor at 4:53 PM No comments:

Q: Where can I get this marvelous book?

A: Rarer and More Wonderful is now available for order from the publisher's website (http://scramblerbooks.com) and will be available elsewhere online in a few weeks.

If you're local to the Bay Area, it will be available at Diesel a Bookstore in Oakland and Pegasus Bookstore in Berkeley on Friday June 6th (see the post below about the book's release reading).

From these, other stores will follow, and will be duly noted here.

Hurray!
Posted by Trevor at 2:01 PM No comments: 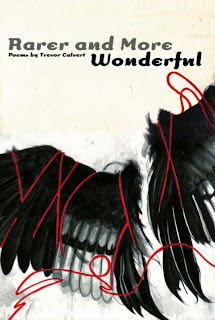 Today I spoke with my publisher and was happy to learn that my first collection of poetry, Rarer and More Wonderful is nearly
done: the cover is complete thanks to the magic of Chris Lane and the final proof is in the mail. We expect the book to be out and into the world at the end of this month!

In support of it, I'll be reading with Eleanor Bayne Johnson at Pegasus in Downtown Berkeley on Friday June 6th, and again on June 14th in Denver at Noah Eli Gordon's.

"Things / hidden remain alive." Like—-and with—-Jack Spicer before him, Trevor Calvert helps us to celebrate this notion by bringing light to the lives of hidden things—-answers, insects, music, the heart—-without ridding them of the veils, the walls, or the hidey-holes to which we're initially drawn. Rarer and More Wonderful is aptly named.

Rarer and More Wonderful are the attachments, the combinations, of these poems. Here, language, carved and specific, secures one figure to the next, to its double, or is that a ghost? Perhaps both. And then what appears in the negative space of what happens: "none of these things / will act as the thing itself that / is soon ending." So there is a serious struggle here with experience, with being, and then when you least expect it comes the debonair turn, like getting away with wearing period hats. The period? Well, there's no closure, either. Of its moment.

Rarer and More Wonderful brought to you by

back to the casual tee